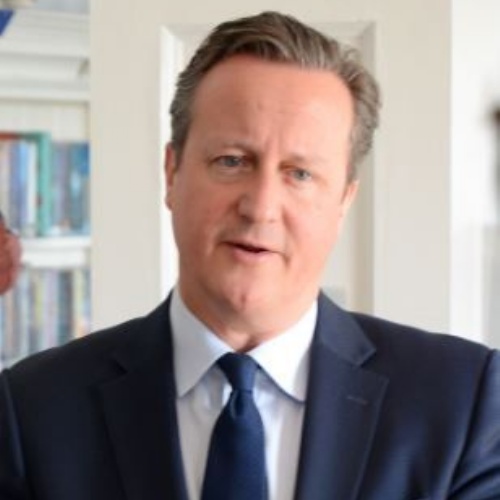 David Cameron visited Woodford County High School on 22 March 2018 to promote NCS The Challenge – an opportunity for 16 year olds which he was instrumental in bringing into being.

He introduced a presentation by the NCS team and spoke of the programme’s aims and successes.  Uptake of the scheme is growing year on year.  Nationally one in six students of qualifying age participates.  Over 60% of Woodford girls took part last year, a statistic that clearly impressed him.  David Cameron then spoke to a small group of our Challenge graduates, asking what they had learned about themselves in the three phases of the process and how it had changed them.  He took an interest in university aspirations and career plans and spoke of his own commitments post Downing Street and about his writing.  David Cameron, as he was himself interested to hear, is the second (former) Prime Minister to have visited the school (Winston Churchill having been the first).  His arrival, complete with police protection team, ended 24 hours of speculation about who the visitor was to be.  Girls were appreciative of the opportunity and of a day that will stand out in their memories as well as in the history of the school.