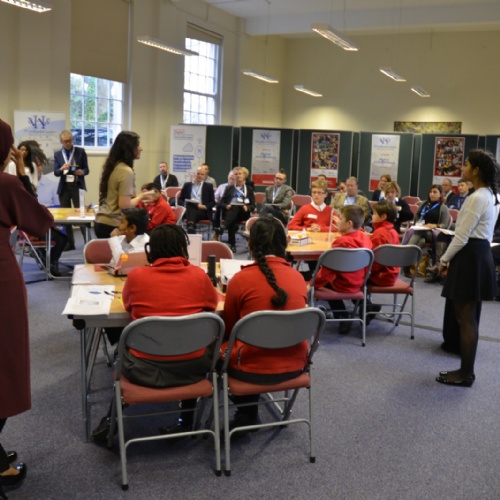 Early in December delegates from a dozen countries (spanning four continents) spent an afternoon at Woodford to watch the Digital School House in action.

Early in December delegates from a dozen countries (spanning four continents) spent an afternoon at Woodford to watch the Digital School House in action.  Year 5 and 6 pupils from the John Bramston Primary School put their learning about input and output devices, sensors and software to the test, bringing their customised Monster Boxes to life with eyes flashing and ears wiggling.  So engrossed were they in their task, and so enraptured by their successes, they scarcely heeded the  thirty or so adults in the room, or noticed the number of languages and accents in use.

Woodford was delighted to contribute to the 2015 INTEL Education Summit, this year held in London.  The delegates that joined us included government ministers,  headteachers, digital innovators and journalists.  Mark Dowling, the founder of the Digital School House spoke about the impact of the project on children’s enthusiasm for computing, on the National Curriculum itself and on its current roll-out in schools nationally.  Danny Arati, mastermind of the INTEL Summit, was acknowledged for his work in promoting professional dialogue about computing in schools both in the UK and World Wide.  Most specifically, he was thanked for resourcing and supporting the workshop at Woodford.

Colleagues here worked with imagination, tenacity and  expertise to ensure that our contribution to this multi-national conference matched the professionalism of the rest of its programme: sessions all held in iconic central London venues from City Hall to Canary Wharf.  School staff were pleased to be guests at the Gala Dinner at One, Great George Street (Westminster) which drew the 12th INTEL Education Conference to its stylish conclusion.